In this blog post, Rohit Salecha guides newbie pentesters on how to use Frida to audit Android applications for security vulnerabilities.

No android application review goes without performing reverse engineering of the app to find out what's actually running in the background. This post focusses on the aspect of dynamically modifying the behavior of the app on runtime using a tool called Frida.

Modifying the behavior of an Android application is desirable in instances where certain sensitive functionalities in app like Fingerprint Authentication is disabled or not allowed to run on rooted phones or you wish to bypass a Login screen or disable the SSL certificate pinning to intercept the traffic.

Traditionally, if anybody wishes to modify a particular functionality they need to use one of the below methods

In contrast to the above two approaches, Frida can be used to hook into the running process of the application and modify the code on the fly without requiring any re-launching or re-packaging.

Frida, as described by its creators as - “ a dynamic code instrumentation toolkit. It lets you inject snippets of JavaScript or your own library into native apps on Windows, macOS, Linux, iOS, Android, and QNX”

To understand this better, consider a LoginActivity running on your Android App which is waiting for username and password as the input. Inside this activity, there is a function defined “checkLogin” which returns the result as true or false depending upon the validity of the credentials. Now what Frida could do is, override this “checkLogin” function in memory with the code written by us, enabling us to modify the functionality, dynamically.

NOTE:  Before we start with the setup, ensure that you have a proper working android, python environment and a rooted android phone with ARM architecture. As of this writing, we couldn't get Frida running satisfactorily on a non-rooted Android phone. Frida is currently supporting only ARM architectures.

Frida consists of two components, viz. a client and a server which communicate with each other over two ports(TCP) 27042 and 27043.The client can be installed by simply firing our favourite pip command as shown below.

NOTE: this installation requires administrator/root privileges on your Windows/Unix environment. Ensure you run the below command with either sudo or on an command shell running with administrator privileges.

Once you have successfully installed Frida client on your machine, fire up your command prompt and identify what is the version installed using the below command

To install the server, you need to browse in the releases directory and download the file depending upon your mobile devices platform and of the version shown as above. Ensure that the version is correct else it  work.

After downloading the file, unzip it and transfer it to your mobile device in a folder of your choice preferably /data/local/tmp as shown below.

Now, on your desktop, fire the below command and test the connection with the frida-server

If everything works fine , you should be having the output as shown in the image below. The output basically shows all the injectable processes currently running. 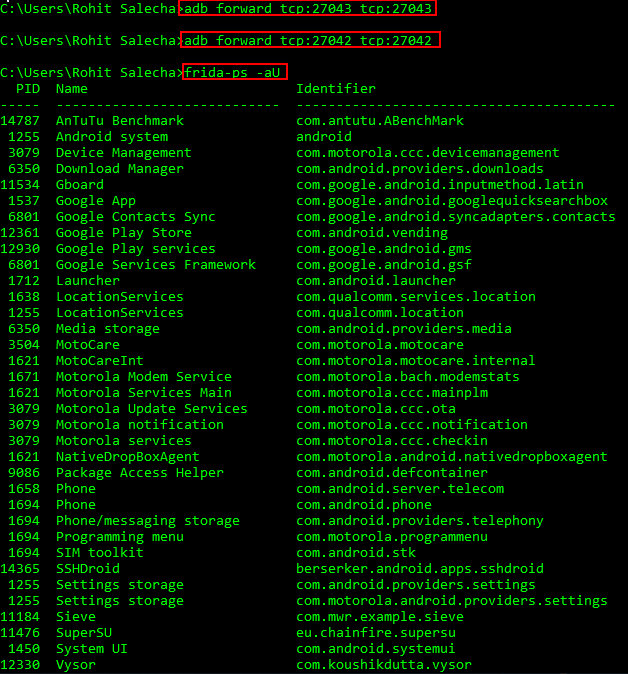 Now that our setup is ready , let’s start using Frida for our assessment. 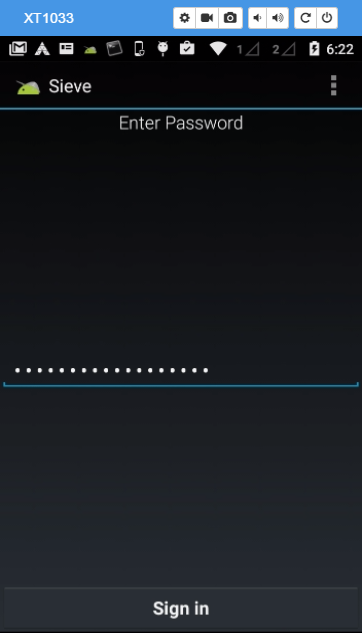 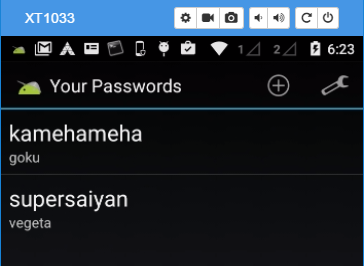 Before we get into login bypass let’s first decompile the sieve app and understand how the login functionality is working. This can be achieved by first decompiling the apk using dex2jar utility and then viewing the final jar file in the JD-GUI

As seen from the decompiled APK, we found a function named “checkKeyResult”. If the boolean value is true, the application redirects the flow to loginSuccessful() function if false then to loginFailed().

Frida has support for binding with multiple languages like Python,C,.NET and Swift. However, we are using python to demonstrate the bypass .The same can be downloaded from here.

Its worthwhile to understand what Frida is actually doing through this little piece of code. It is simply overriding our target function “checkKeyResult” by inserting the boolean value as “true”.Here, we are not modifying the function but we have control over what is being passed and what is being returned from the function. 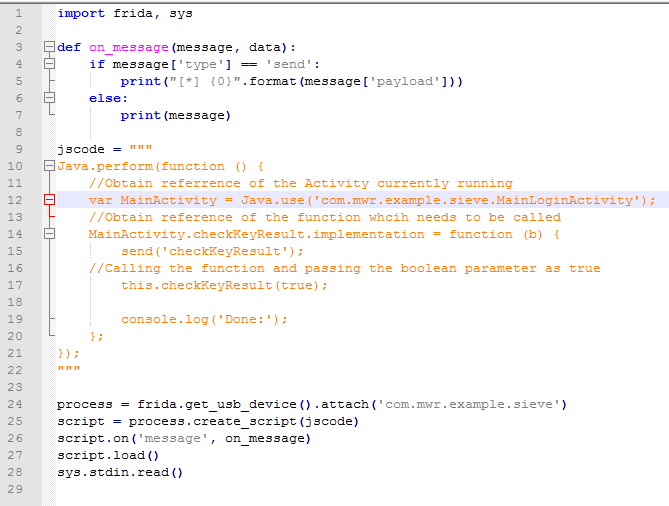 The code , which needs to be executed in process through Frida is written in javascript is from line 10-23.

Start the application on device and then execute the python script. Once the script is executing it’ll wait for the “checkKeyResult” function to be called.

Once we press Sign In, the “checkKeyResult” function is called in the runtime and Frida injects our JS , passes it a true value and we are able to bypass the login screen. 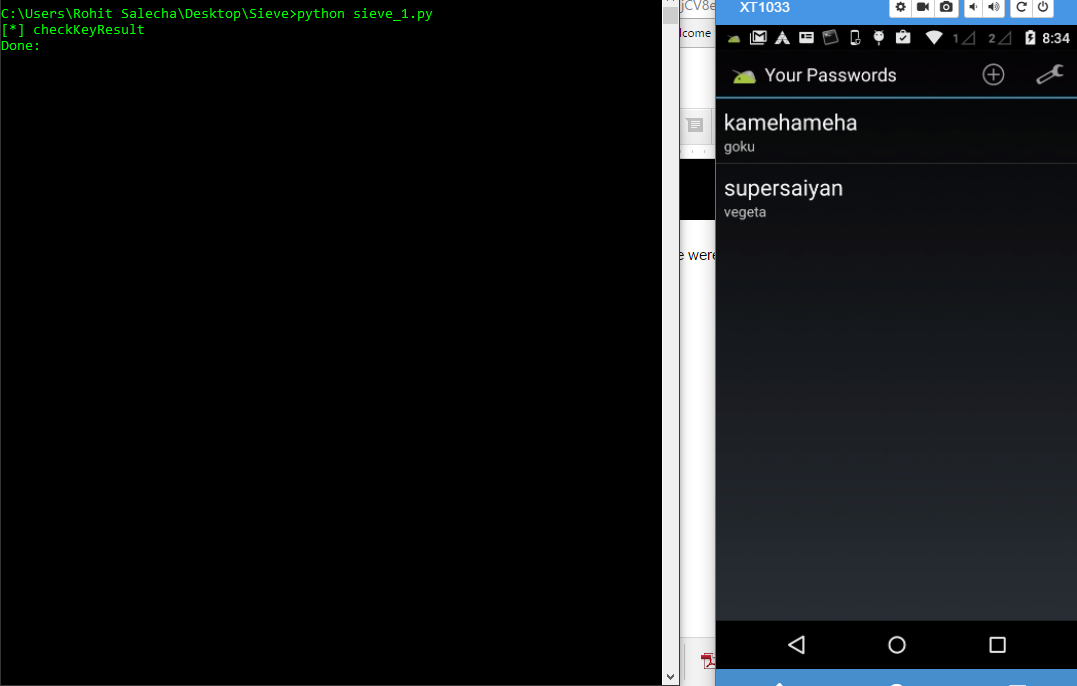 The Sieve app has a feature in which if you push the app into background and then try to bring it back, it’ll ask for a Pin to be entered. Using the below script, it is possible to bruteforce this pin and then gain access to the application. The script can be downloaded from here. 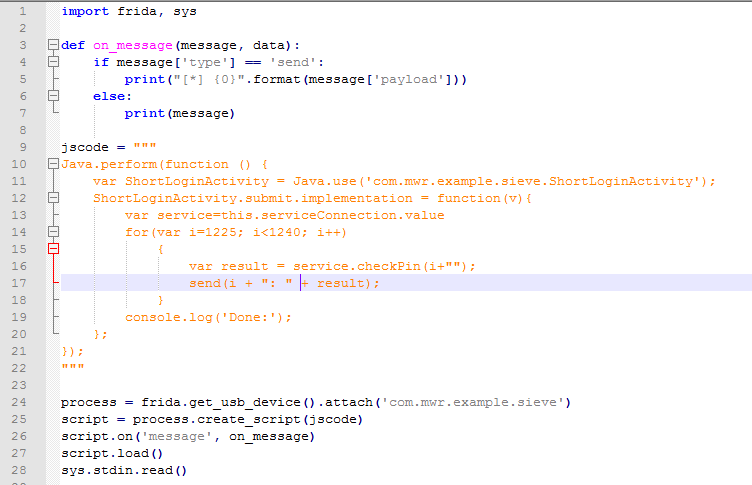 Bypassing root detection is one of the most important use case in any Android application test.Applications check for a rooted device during installation or for restricting use of certain sensitive functionalities like fingerprint authentication.Root detection is achieved by checking for installation of most common APKs like SuperSu which govern the root privileges or by attempting to write into the protected directories of the android file system like root.

To bypass these root detection techniques you would have to decompile the APK, edit the smali files and then repackage it by patching the methods which are implemented for root detection. It's a fairly tedious process but using Frida, it really is relatively simple as we’ll see in the next example of InsecureBank2 Android application.

In the InsecureBank2 application, upon successful login, the application displays a warning message to the user that the device is rooted as shown below 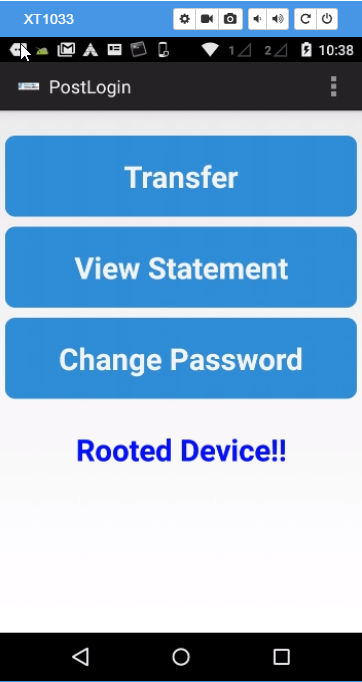 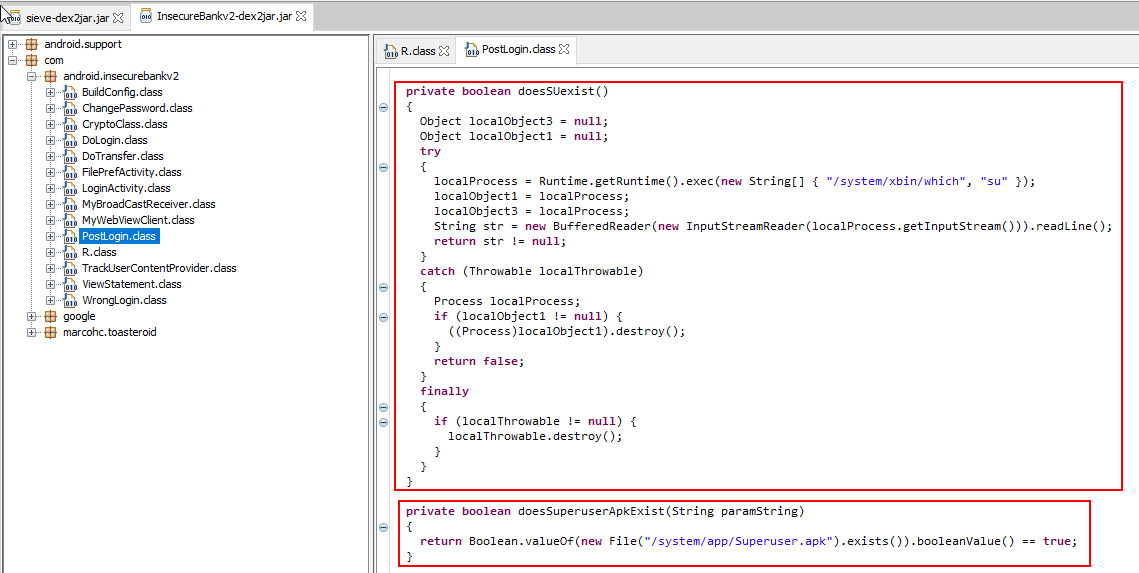 Using the below javascript code we bypass the root detection logic and that’s why we get the message “Device not Rooted”. The code is available here. 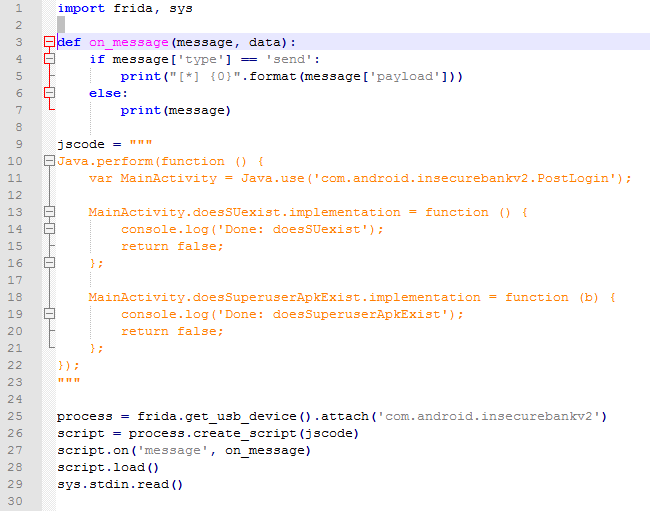 Let’s run this script and then press Sign In button in the app as shown below. 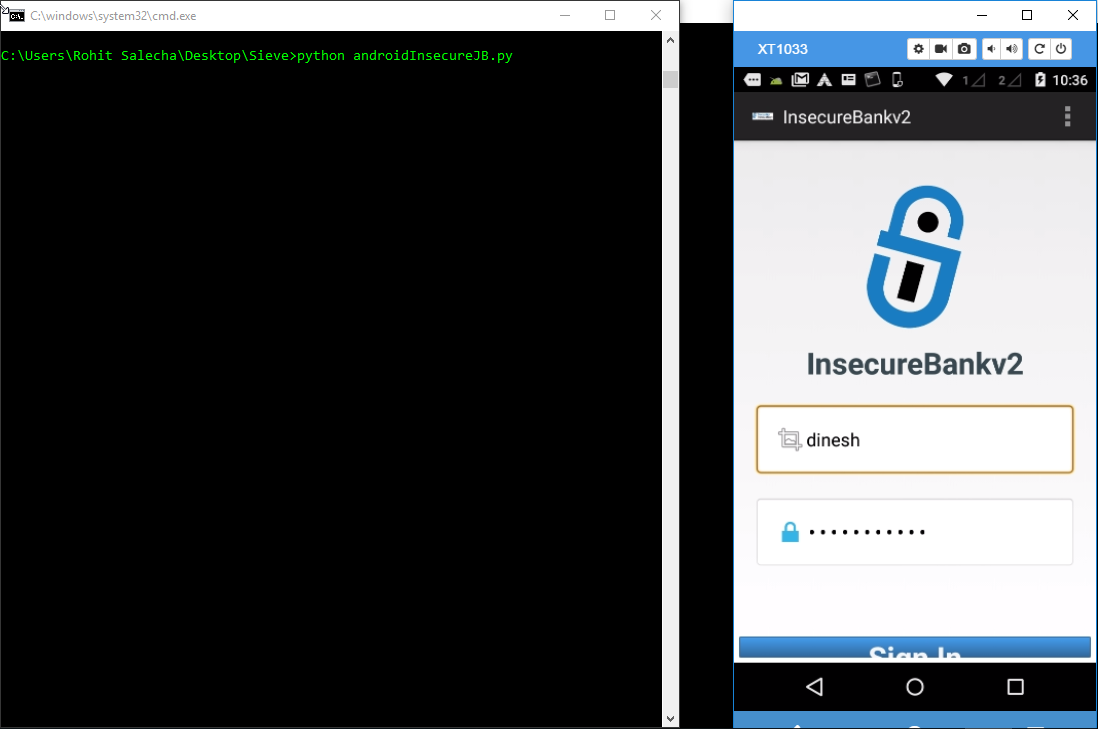 Once Sign In button is pressed, the PostLogin Activity is initiated and the root detection logic is called. However, since Frida is using our JS code, it bypasses the detection successfully as shown below. 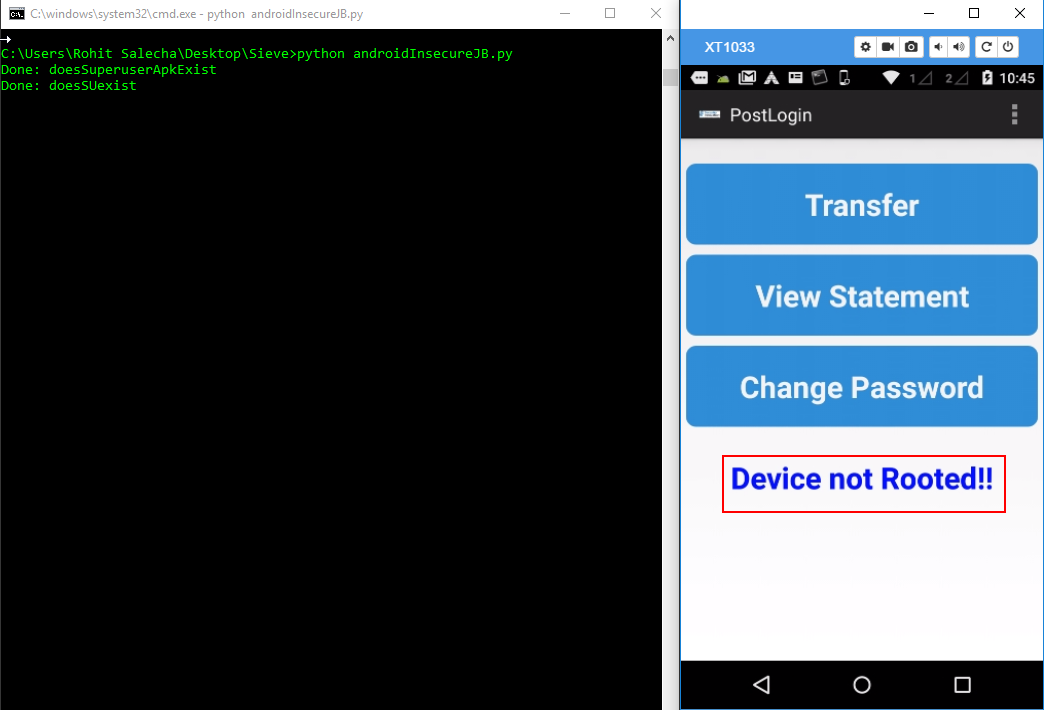 What more can you do with Frida ?

There are multiple tools for pentesting which are built on top of Frida which can be used during your security assessment.Two such tools are described below

Frida also supports iOS devices and can help us with pentesting iOS Apps. We’ll come up with an iOS version of this blog soon , stay tuned !

Hope this post was useful and help you in your next android review!

During one of our recent thick client application penetration tests, Sanjay encountered a scenario where the application was built on top of a... 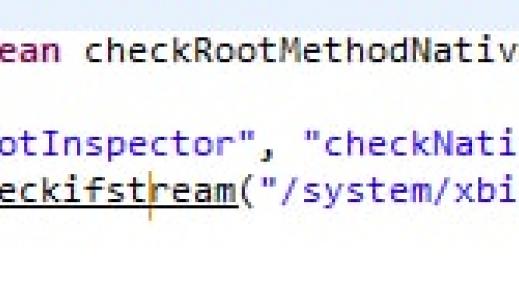 In our previous post: Pentesting Android Application Using Frida, Rohit looked at how we can use Frida for basic run time instrumentation. In short... 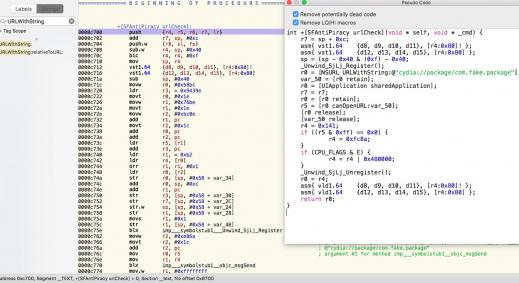 In today’s connected modern world every organization wants to have a mobile application for its own services. This also requires that these...